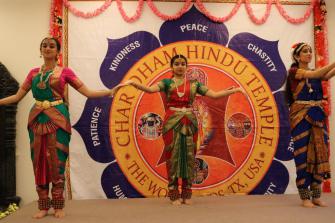 TileWorks of Conroe had the opportunity to be a part of the Char Dham Hindu Temple project in The Woodlands, Texas. We fabricated and installed most of the donated Indian granite. The granite used was Coffee Brown, Absolute Black, and Black Pearl.

The love story behind the temple and its construction is heartwarming. After his wife suffered a stroke in 2008, it was her wish to go to a temple located in India. Unable to travel, it was Surya's idea to bring India to his wife and fullfill her wishes.

TileWorks of Conroe is proud of our contribution to this unique temple alongside Surya N. Sahoo, President and Founder of SKAI Foundation.

Print | Sitemap
Everything displayed on this website are trademarks of TileWorks of Conroe. All other products mentioned are registered trademarks or trademarks of their respective companies. 2016 ©TileWorksOfConroe All rights reserved.
Login